You might be familiar with the workflow that all of your game scripts are working only when you hit the Play button. Did you know that you can force some scripts to be running even when you’re in the edit mode?

Why would you do that? I mean that you may have player scripts, enemies scripts, weapons scripts, environment script, so it makes a little sense for them to execute when the game itself its not running. There are some cases when it can be convenient. Here are some examples:

And a lot more… I am sure that you will find a lot more cases when you would use ExecuteInEditMode annotation, but for now let’s see a code example showing how to use it.

What this code actually does? It makes the current object follow another. It’s no different than usual game script, but pleace notice the [ExecuteInEditMode] annotation before class definition.

Now let’s set up the scene by creating something like a snake. There will be a Head and 3 Body objects. Each body object will follow the body/head on the front, so Body 3 (1) follows Body 2 (2) etc. 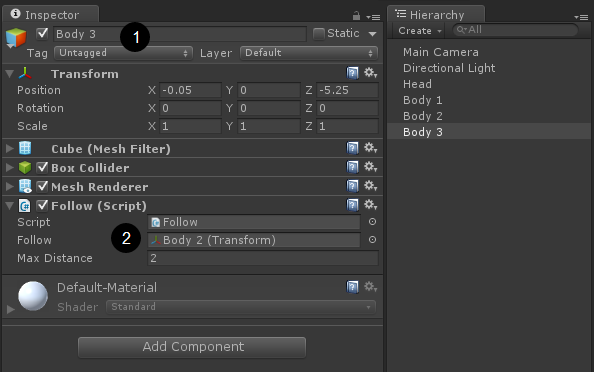 And here’s how our scene looks like in the Scene view. I’ve added labels to each object to help you tell one from another.

Now it’s time for the real thing! Please note that everything is done on the Scene view without going into the Play mode!

You may now be thinking of many great scenarios when you would use ExecuteInEditMode annotation, but be careful! If you research a little, you will find out that it is often considered evil and unpredictable. The main reason is that it can easily mess up your scene if not used with caution. If you use it to modify project assets, the modifications may be permanent! This is not the case when you’re in the play mode (except for some rare cases). Also Unity might have trouble with detecting if your scene is actually dirty or not if you constantly change objects’ components in your scripts.

Having this in mind, please consider using any SCM system like Git, Subversion, Plastic SCM or Perforce. If you’re not into revision control systems, then at least often back up your project.

If you want, you can even use the UnityEditor classes in your game code, but in that case you should use preprocessor directives to cut this code out when building for the target platform. If you don’t do that, you will get compilation errors.

If you’d like to check it by yourself, you can download the unitypackage file, then double-click on it to import its content into your Unity project. You will find there an example scene and a script from above.