7 Things to Remember When Working in a Team
Guide

Whether you are working in a team or alone, you should know how to efficiently work on a project with other people. It will not only make working on a single project with someone a lot easier, but also improve your coding style and project management skills significantly. It’s nothing to be afraid of, really! I’d like to explain in a few steps what are the most important aspects of working in teams.

Before progressing any further you must make sure that your project is well-organized. It’s an important requirement because unorganized project is very difficult to maintain. It’s not impossible to work on such project by all means, but each time you will be forced to work on it, you may feel an unstoppable desire to murder someone in your near proximity. And this feeling will get worse as the project will grow.

You can learn how to keep your project organized from one of our previous blog posts. 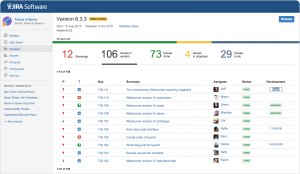 If you aren’t using one already then I am sure that you’ve heard at least about Jira, Redmine, Trac or Mantis. In fact, there are a lot of these and you may have a serious problem with deciding which one to choose. From my experience there’s no solution that can be called “the best one”. All of these has some pros and cons. I strongly encourage you to check at least 3 of them before decidingwhich one will be good enough for your needs. Keep in mind that you will learn what you really need only after a few months of working with any of it.

Why issue tracking is that important? When working in a team, good communication is a key. Humans are lazy and forgetful creatures. If you tell someone that he/she has to do something, he/she remembers that task clearly until tons of similar tasks fall out from the sky. You have to accept that simple fact. Also don’t rely on your own memory – it has been proven that the need of remembering a lot of things significantly increases your stress.

It’s obvious but can be often forgotten. Unity is using binary serialization method for its assets by default (hey, Unity guys! Who told you that would be a good idea?). This simply means that if two people will change a scene, animation setting or a prefab at the same time, one person will have to give up his changes because of a conflict. The situation is similat to the one in which two guys dating the same girl. One of them sooner or later will have to give up (let’s not talk about alternatives, shall we?).

Force-text serialization can be enabled in the Edit -> Project Settings -> Editor: 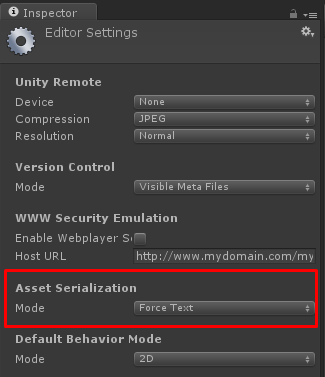 You don’t need to confirm anything. Unity will perform re-serialization of your assets immediately.

4. Agree on a common coding style

Be ready for a big fight – programmers don’t like to change their habits. But you and your colleagues still need to do it, otherwise it will cause a lot of nasty conflicts on code merges. Also, you have to decide if your source files should use tabs or spaces for code indentation. You may look for something like an official or community style guide for a specific language. There’s one for C#  that you may find useful. You don’t have to blindly follow if you don’t agree with some parts of it, but when there will be a disagreement within your team, it may be a good source of possible solution.

Remember to not force any decisions on your team if there’s a strong defiance on that matter. If you want them to give everything they got to your project, you have to make them love working on it, not hate it!

Some assets can be hard to merge even if you switch the serialization mode to text. It may be necessary to decide on a policy on how and when communicate that someone is about to edit an asset. Some VCS like Perforce or PlasticSCM offer a feature called exclusive checkout. It means that all files are read-only until someone will decide to edit it. If the second person tries to edit that file in the same time, he/she will receive a warning that this file is being checked out by someone else.

You may also want to take more human-like approach. I knew one company that had a magnetic table with post-it notes on it. Each note had a scene name written on it. If someone decided to edit a scene, he or she took matching note to his/her desk so anyone else knew that this scene was currently being changed.

6. Communicate often, but watch for interruptions

Talk often with your team about what they did and what they are about to do. Do it every morning if possible and make it short. Discuss about possible issues and how to solve them, if needed.

Talk with your teammates often if you need to, but watch out for interrupting their work. Avoid calling them or speaking to them personally without earlier notice. If you do that, you decline their right to react whenever it suits them. You make them immediately lost the context of the work they were doing and to focus on your thing – it’s a very selfish thing to do. Even if you’re in a hurry, try to notify them using an email message or IM first.

Choose communication software that allows to freely configure its verbosity level. Some people don’t mind to be interrupted, some does. Nearly every e-mail client allow to freely configure notifications level so if you want to talk about something and you’re not in a hurry, use e-mails. Some things cannot wait for too long, so you need Instant Messaging of some sort. I strongly recommend you to try Slack. Slack highly respects everybody’s right to not be interrupted and gives an option to allow interruption in really important matters. Slack also allows your team to create channels. Channel is a place when two or more people can discuss with each other about one specific matter.

Not so long ago Unity announced their new service called Unity Collaborate. It’s worth trying because it directly targets Unity developers and the client is working within the Unity editor itself.

We’ve never been using Unity Collaborate (it’s still in beta stage), but it promises to solve issues with data merging and staying in sync with your teammates. It’s worth checking and you can try it for free.

There are no two identical projects and two teams will never be the same. You should keep your eyes and mind open, and watch for any issues your team encounters that are worth solving. Not all issues can be solved easily and many project directors make a mistake with solving an issue with a solution that makes it even worse. Trying is not a sin, but not admitting we made a mistake and regressing in work that has already been done unfortunately is.